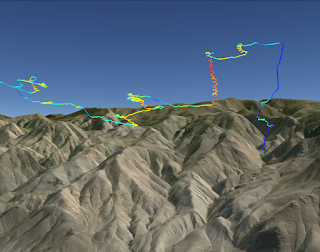 Task 7: Great Day for a Drink, or Three! 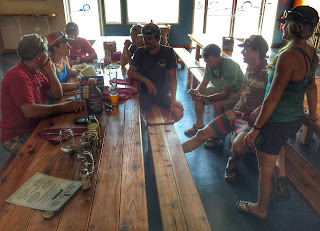 Today was our last chance to stage a competition task before the awards ceremony tonight. The forecast was looking a bit windy but we soldiered up the hill and waited it out as usual. Before the official launch window, we witnessed some amazing displays of high wind launching, top landing, and frisbee thermaling, but after waiting up there a while, the task was officially called off, and everyone rode down the hill to entertain themselves in other ways. Today we opted for the local brewery! A highly recommended spot for great microbrews and excellent food.

Task 6: Great Day for a Hike 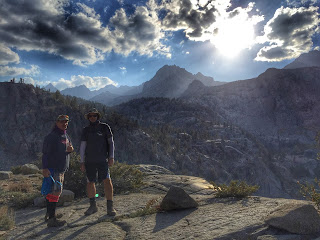 The task was called off due to strong wind after only a short time on the hill. Most folks opted to explore some hiking options in the Sierras. We followed some of our Seattle buddies up to Lake Sabrina at 9,000 feet where there is a hike to Blue Lake located 1,500 feet higher. It was a six mile round trip, at a pretty constant 45 degree grade, and it took us over four hours for the whole trip. But what a beautiful place. The aspens are turning orange and red - they have seasons here! We passed quite a few locals on the way down who were heading up to camp up there. 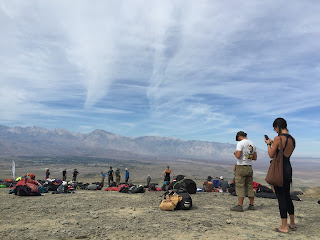 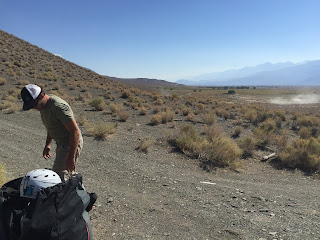 Today they called a daunting triangle task around the valley, with a start cylinder downwind and then a tough upwind leg to Black Mountain, followed by a long flatland line across the Owens Valley to the Buttermilks at the foot of the Sierras, then back across the valley to a point way downwind of launch, and another tricky upwind jog at the end just in case you didn't bomb out yet. Thom and JK and I were all working together after launch, trying to break through a pretty low inversion a thousand feet above launch. But I had a terrible problem. My speed system was detached on one side and possibly broken. 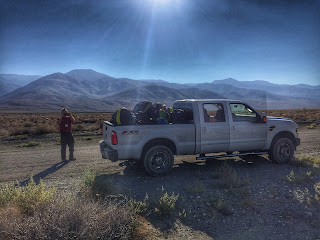 Among local free flying pilots, the crest of the White Mountain range is known as the Hypoxic Highway. Thom and I borrowed oxygen kits so we wouldn’t get hypoxic. But I’m calling this mountain range the Frostbite Freeway because that’s what I got today for spending too long too high. I pulled out of the lift at 17,000 feet because my fingers were numb. I finally got some feeling back into them when I got lower, but tonight I can see a dead white spot on the end of one finger. I had gloves that I thought would be good at those temperatures but apparently I need better ones! 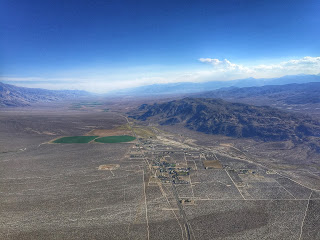 Just a blog post from the bottom. Seeing as Alex is exhausted from his long flight yesterday, he left me to report from my perspective.

Task 1: Any Day You Can Walk Away 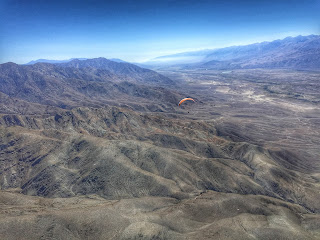 By that measure it was a good day for all but one of the pilots. Today's conditions were similar to yesterday: high pressure and multiple inversions, but the valley wind didn't fire up quite as strong or as fast. So everyone got off okay, but it was a low save scratchfest for many people for quite a while. One pilot got low behind a finger and apparently went parachutal and crashed in a ravine below launch. After a while many pilots started getting up and away, and we aimed for the upwind turn point, but it was tough going. Thom scratched for 28 minutes (ha ha) and ended up in the bomb out LZ, and then ran back up to relaunch but it was closed because of the rescue. JK flew for 38 minutes and landed after thermaling right above the injured pilot. I got my highest yet here, 8,500 feet, and then pushed into the wind to fight my way down to the dirt a kilometer short of the upwind turn point. I had some good company down there. And I saw a coyote running below me down a dry creek bed just before I landed. Never seen one before. It was pretty cool. I heard about 15 pilots made goal. Those guys are amazing. But I also heard the day might be canceled because some people had to land during the rescue. More details as we get them. [Update: the day was indeed cancelled retroactively.]

What a beautiful and awe inspiring place. Many pilot opted to skip the practice task and did some free flying across the valley to the south, at Walts launch in the Sierras. Meanwhile, those of us sticking with the program had a tough practice day today: stable conditions and strong valley wind. One guy got dragged across launch and bounced off some rocks, and headed to the hospital to get checked out. Quite a few talented pilots made it up and out to follow the 108 km course line, some almost completing it, but many pilots hit the dirt either below launch or someplace a few miles downwind of launch. JK and Christopher made it the farthest of our group today, as far as I know, taking the frisbee thermals a few fingers downwind. I bobbled up and down around launch for what felt like an hour, pitching around in strong blown out bubbles. I felt happy with my new wing in that stuff. But I have never flown so long and so low while so bundled up and with prongs sticking up my nose (in case I headed to space and might need oxygen). Thom and Scotty were a bit farther back in the launch queue and opted to skip it like many others when it really started to blow. Hopefully the next few days are a bit easier for everyone! 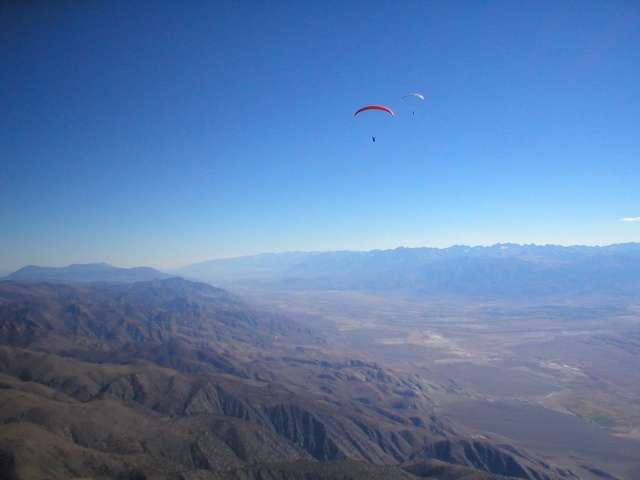 Thom and I are once again signed up for the US National Paragliding Championships. Not because we aspire to be any kind of champions, but just because we like flying with those guys! This year the event is in the Owens Valley, famous as one of the deepest valleys in the US and also for some of the strongest thermals in the world, with climbs potentially to 17,999 feet. We are following in the footsteps of several former brave simian astronauts from Oahu: Doug Hoffman, Quentin, Fireman Dave. Thom and I are now frantically trying to get our gear together in preparation for this space mission. We have both arranged to borrow oxygen systems, and we are scrambling to assemble cold weather outfits that will keep us from getting frostbitten at sub-freezing temperatures aloft. But mostly we are getting excited to fly in one of the world's premier and most beautiful flying destinations, alongside a gaggle of great pilots from around the world. Let's do this!
Posted by Alex at 4:27 PM 8 comments: